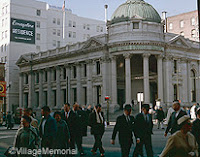 What do you think the future holds for end-of-life freedom? Will we look back on this time, in decades to come, and see this as a dark period in this nation’s history (akin to the pre-Civil Rights Movement era)?