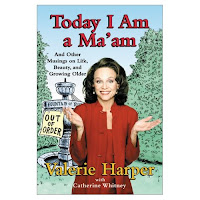 Valerie Harper (2001) opens her book with some American perceptions on aging and women’s beauty. She mentions the invisible “shelf life” on women in the media as “ageism is practiced by the networks” to the point of being unrealistic. “If life imitated television…mom would be thirty, and grandma would be thirty-three” (p. 10-11).

Harper mentions a couple positive ways in which American beauty standards have changed over the last few decades. “Flight attendants now look like America,” Harper says, as they are no longer bound to 1940’s era rules of being “single, female, white, under age twenty-seven, between 105 and 125 pounds, and between 5 feet 2 inches and 5 feet seven inches” (p. 24). Sizes of dresses for women have also lowered. What used to be a size 10 is currently a size 8 or 6.

Harper touches on the extremes women go through to maintain beauty (hot waxing, breast implants, lip plumping), and the ridiculousness of dieting (diet fibs, beating oneself up mentally, and diet fads). She easily sums up the mind of many dieters when she says, “many of us think of food in one of two ways. It’s either legal (a lettuce leaf) or illegal (a brownie)” (p. 84). She makes a personal realization of overeating, “I…came to the understanding that the problems I once had with food were not merely about food Eating was a way of trying to fill up the emptiness, to provide comfort” (p. 88).

Harper moves on to role models for women. She mentions FLASH (“a senior woman’s hockey team in Chicago”), Gloria Steinem’s first marriage at the age of 66, and actress Ruth Gordon’s remarkable attitude on growing older (p. 95). Ruth once told Valerie, “I made a decision…that I could get old, or I could get older. That was my choice. I didn’t have the choice to stay young. I decided to get older instead of getting old. Because old is a destination. Older is a process and a path” (p. 95-96). Harper also quotes actress Sophia Loren, “There is a fountain of youth. It is your mind, your talents, the creativity you bring to your life and the lives of the people you love. When you learn to tap this source, you will truly have defeated age” (p. 155).

Harper also explores the power of positive thinking with her chapter on “humor replacement therapy.” Humor has been shown to reduce stress, raise your pain threshold, and boost your immune system. In one study, people listening to twenty minutes of [comedienne] Lily Tomlin doing her telephone operator routine were much less sensitive to pain than those listening to an academic lecture” (p. 132). She points out some favorite comics she follows online “MinniePauz.com”(p. 139) and leads out of her book with some additional encouragement. “Wouldn’t it be great if we didn’t care so much what other people thought of us?” (p.144) “Wouldn’t it be great if looking good wasn’t tied up with looking young?” (p. 144).
-----
Always curious on new attitudes on aging, I was interested in to read actress Valerie Harper’s views as she entered her sixties. This book focuses on the positives of life and aging, of looking at life in a more confident way, and not putting oneself down. It lightheartedly addresses some of the darker or more comical things in our American beauty standards, but without putting people down who engage in such practices. It asks questions without accusing and reminds me a great deal of author/poet Judith Viorst’s poems on aging which approach aging with a touch of humor that is more positive than negative.

A Wedding in ICU

A couple marries in the ICU room of UCLA medical center, so the bride’s father, recovering from surgery, could be present.

UCLA says this was a first in the medical center’s history. To protect the patient from infection, the wedding participants wore “disposable yellow hospital gowns over their wedding finery and blue protective gloves” (Groves, 2009).

The bride, Janette Villalobos, didn’t want her father to miss her special moment. She said, “I'd be heartbroken if my dad didn't see it" (Groves, 2009).

Medical Needs Must Be Communicated
Mr. S., an artist in his 80s, kept communicating to a friend a plaguing pain he was dealing with. Although Mr. S had seen his doctor for other issues he only communicated his current problem to a close friend, never his doctor. Finally, when he became too ill to ignore his problems, he went to ER and it turned out that he had an advanced stage of prostate cancer. Had Mr. S. communicated to his physician earlier of the pain he was experiencing his condition might have been curable.

When seniors do not communicate their issues and concerns to the health professionals treating them, they do not get the proper care they need. This results in less productive office visits, which in turn would likely end up costing them more (financially and health wise) as they might require additional follow up appointments to diagnose problems and if a condition were serious it might not be as treatable upon later diagnosis.

Physical Impairments Preventing Communication = Depression
The National Institute of Mental Health has proved the “relationship between hearing loss and depression” due to the social isolation the impairment causes. Additionally, I would add another couple impairments to this list: walking and writing.

Mrs. R, a good friend and elderly neighbor in her late 70’s, fell on pavement. Her fall resulted in a break of her right wrist and hip. She discontinued writing letters (because of her broken wrist) and shopping, eating out, or getting together with friends (because her walking was impaired by the accident.) It was even a chore for her to walk to answer her telephone. Although her body seemed to have healed several months later, she never returned to writing friends and family from out of state, she seldom answered telephone calls, and she gave up walking to do her own errands (shopping, bank, Laundromat). A once vital and independent person became socially withdrawn and very depressed once she no longer was able to communicate and perform the tasks she once had.


Lack of Communication With Regard to Government Benefits/Programs
It has been proven that “many retirees are not receiving an appropriate level of care or are ending up in nursing homes because they don’t know about services that would have allowed them to remain independent.” On the flip side of this, some seniors might not even be aware of programs or services that can help them afford retirement/assisted living homes, by significantly reducing their financial burden.

Mr. P, a WWII vet who recently moved into a retirement home, found he could benefit from Veteran’s Assistance when he was choosing his retirement home. The small 1-bedroom apartment in the transitional retirement to assisted living facility would have cost he and his wife $4,000 a month. However, because the home communicated the veteran’s discount to him, and provided him the necessary paperwork to fill out, he was able to register for a discount program that cut his monthly rent at the retirement home by 50%. For his $4,000 rental, he pays $2,000. For seniors living on fixed incomes, a financial saving of this proportion is crucial.

Senior Suicides and Mental Health Issues
It was most startling to learn of the number of suicides that take place among the senior population. While their percent of the population is just at 13.7%, they still make up “at least 25-30 percent of all successful suicides.” It is interesting and disturbing, how few senior suicides are brought to the attention of the public. Most news sources focus on suicides up through middle-aged adults. I actually cannot recall having heard of senior suicides before, other than in cases of the terminally ill where the individual chose when to end their life and suffering. This fact is one that should be communicated to society more widely. Without proper knowledge of issues such as senior addictions, senior mental health impairments and senior suicide rates, less attention is being paid to the very individuals who would benefit from the attention most.