Why You Should Avoid Metal Caskets and Coffins 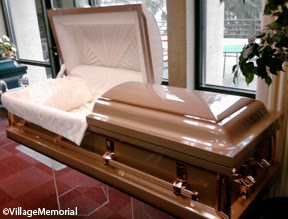 (The Following is Our Own Personal Experience and Original Photos)

A metal casket like this one (shown at left) may look reverent, sleek, and protective on the outside with automotive finish and shiny accents, but after burial there's nothing dignified about the condition of what lies within. 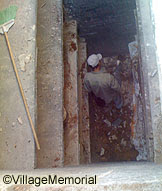 After running out of space in the family crypt and unable to purchase adjacent spaces, our family had to make a decision. For the elders wishing to be placed in the family plot, the family decided that the eldest remains would be exhumed and cremated to make room. The process was difficult for our family to witness, due to the surprisingly poor condition of the metal caskets. Additionally, the remains of loved ones buried in natural wooden coffins were vastly different from those who were buried in sealed metal caskets. 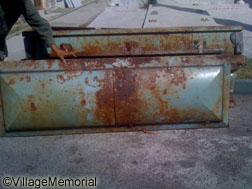 The choice to use a natural wooden casket or a metal casket could not be more clear. The remains we
saw from the sealed (gasketed) metal caskets were a sludgy mix of chemicals, rust, and body fluids. By contrast, inside a natural wooden casket our grandmother's remains had decomposed naturally into a simple skeleton, leaving no doubt as to which was the superior burial container.

After the first exhumation was complete, they began to remove our uncle who died in 1986. As the owner of the crypt he had purchased an expensive modern sealed metal casket. 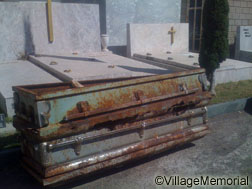 The workers lowered ropes into the crypt, but upon attempting to remove the metal casket they found that the bottom had rotted through. The metal casket had to be rotated upside down to be removed. The bottom of the metal casket contained a rusty black thick tar-like substance, which was drained onto a cotton sheet. The fabric sheet was set out for drying in order to obtain what bone fragments had been left. Sadly, our uncle's remains were an oily tar-like black muck. 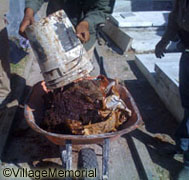 Although our uncle was a large man, and died after my grandmother, there were less remains and what was collected was not recognizable as human remains. Our uncle had been embalmed, so it suprised everyone his body was in such a poor state. This was attributed by the sextons to the fact that our uncle had been buried in a sealed metal casket. The anaerobic bacteria and gases from putrefaction and decomposition under the seal of a gasketed metal casket result in the liquification of remains - A surprising fact considering the main selling point of gasketed metal caskets is to protect your loved one from the elements. 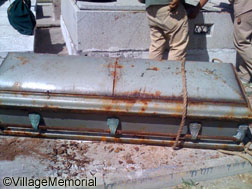 The exhumed remains were removed from the liquid and placed into bags which were re-interred into the niches.

Please share your thoughts about disinterment. Have you ever disinterred a loved one or witnessed a disinterment? If so, please share anything helpful.
Will you purchase a metal casket after seeing these photos? Why or why not?