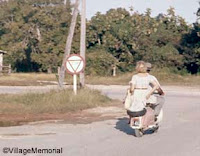 Today Pa had a doctor’s appointment. Pa phoned me at work shortly after I arrived to tell me to cancel his appointment. I told him it was too late to cancel. He said he’d go next week. I told him the appointment was this week, not next week and it was too late to change it. Pa said he knew my sister did not want to drive him so I told him I’d come pick him up if she wouldn’t. In the end my sister drove him, but told me how Pa didn’t want to go to the doctor because he didn’t want to spend money. Since the doctor’s appointments are not expensive, and take place seldom, I knew this was simply an excuse.

Later Pa was in good spirits after he saw his doctor, so I confront him. I ask why he didn’t want to go earlier and he mentions not wanting to burden us driving him. When I ask about the financial concern he mentioned to my sister, he admits that both issues bother him (spending money and burdening us to drive him).

A couple days before this, on a quick trip to the store shortly before they closed for the night, my sister decided not to take Pa along. Pa wanted to go, but they were just 15 minutes to closing and she didn’t think he’d have enough time to walk the place quickly. As Pa is just 1 ½ months post knee surgery, his walking is still labored.  Sis was being sensible, but not sensitive to Pa and they argued when she returned from the store. Pa took offense, stating that sis was embarrassed to be seen with him. While this was not true, it was how Pa interpreted being left out of the trip.

About two weeks before this, when I was sick with the flu, I had sis take Pa to his post-surgery follow up appointment. After the appointment, on the drive home, Pa phoned me from his cell phone asking to go out to eat breakfast. Since I was still sick, I asked that they go eat out without me. When they arrived at the house just a few minutes later, I knew they’d skipped breakfast. When I asked what happened, Sis said Pa wanted to come home, and for the rest of the day, Pa didn’t speak to either of us. Later that day, Pa blew up and complained that he wanted to eat out for breakfast. Pa was trying to be subtle by saying he wanted to go home, but he actually wanted to eat out with the family.

Lessons Learned – 1) We must be cautious of the things we say, even in passing, with our loved ones. Oftentimes with lessened abilities, sensitivity is increased and little things can be misinterpreted and considered offensive. 2) Sometimes convenience is hurtful. Try to include your loved one even when it may take longer or on the flipside, go out and do things your loved one wants even when it’s more convenient to stay home.

Have you and your loved one misunderstood each other? What things do you do differently to keep the peace? What did you learn?