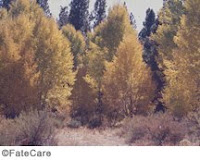 “Americans put 827,060 gallons of embalming fluid, 1,636,000 tons of reinforced concrete, 104,272 tons of steel [for caskets and vaults], 2,700 tons of copper and bronze, and 30 million board feet of hardwoods into the ground each year...the concrete alone…[is] enough to build 13,573 American houses.”
A growing trend is the practice green or natural burial, which compassionately cares for the deceased and protects the earth. However, this natural and safe method has been practiced for centuries.

Muslims wrap their dead in “white wrappings” and bury them directly onto the dirt of the grave (Jonker, 2006, p. 158). As Jonker (2006) explains, “No coffin is needed or wanted” (p. 158). The body is lowered into the grave “with shawls or lengths of cloth” and is “positioned as if sleeping” (Jonker, 2006, p. 158) with either a stone or pile of mud placed under the head for support (p. 158). The natural burial of the body in Islam (wrappings of just a shroud, no embalming and being placed directly in contact with the earth) allows for a more natural return to the earth. There is no use of unnecessary embalming fluid and coffin to slow the recycling of the body to the soil.

Ecohumanist beliefs also support natural burial for the preservation of the planet. One of the principles shared on the Council for Secular Humanist (2009) is to “protect and enhance the earth, to preserve it for future generations, and to avoid inflicting needless suffering on other species.” When one considers all the pollution and waste from common contemporary burials (embalmed body in casket), one cannot ignore the significant and devastating effects upon the earth. Cullen (2006) presents some very startling statistics on contemporary burials.

“Like the contents of any landfill, the embalmed body’s toxic cache escapes its host and eventually leaches into the environment, tainting surrounding soil and groundwaters” (Harris, 2007, p. 38). This happens because coffins are not leak-proof. Harris (2007) explains that the “combined body fluids, liquefied tissue, formaldehyde, bacteria, and corporeal acids…collect at the lowest spot of the casket, pooling in a…toxic soup” (p. 37). Wood caskets are porous offering minimal resistance to such toxic liquids, which can easily leak out (Harris, 2007, p. 37). While “metal caskets are more resilient…acids work to breach them as well” (Harris, 2007, p. 37). Cullen (2006) notes that green (natural) burials can “cut that waste [and pollution] dramatically” (p. 52).

Embalming and caskets are not only unnecessary, they are wasteful and harmful to the planet. Obviously the pollution of the earth and the waste of precious resources do not help to protect the purity or safety of our planet. Natural or green burials, as supported by Ecohumanists, are clearly the most ethical and compassionate methods of burial. They help protect the planet for future generations.

Harris, M. (2007). Grave Matters. A Journey Through the Modern Funeral Industry to a Natural Way of Burial. New York: Scribner.

Jonker, G. (2006). The many facets of Islam: Death, dying and disposal between orthodox rule and historical conventon, in, C.M. Parkes, P. Laungani, & B. Young (Ed.), Death and Bereavement Across Cultures (pp. 98-130) London: Routledge.

The Affirmations of Humanism: A Statement of Principles. (2009). Council for Secular Humanism. Retrieved June 2, 2009, from: http://www.secularhumanism.org/index.php?section=main&page=affirmations
All content © Village Memorial. 2009-2010.