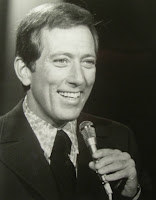 American legendary singer, Andy Williams has died at age 84. Andy's longs career spanned over 74 years. Although he is most closely associated with the song "Moon River", his noteworthy talents earned him 18 Gold Albums and 3 Platinum. For 9 years, Andy Williams hosted his own variety show called "The Andy Williams Show" from (1962-1971).


Did You Know?
In lieu of flowers, the family asks that donations be made to the Bladder Cancer Advocacy Network.