Our 2012 Entry at Tech Briefs' Design the Future Contest 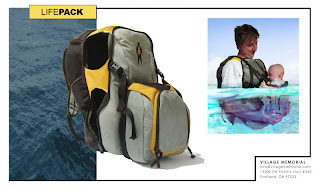 Introduction
In developing our company devoted to better end-of-life, death and dying, we have at times come up with ideas for gear that could preserve life. Recently, we decided to act on these inclinations to design a life-sustaining product we hope to be the first of a series of emergency response products inspired by events in the Pacific Northwest. The LIFE PACK, is our first attempt at life preservation and was inspired by Oregon’s Taki Too Disaster. The following is a brief summary of the tragedy and our concept in development.

The Taki Too Disaster
On June 14, 2003, 11 of 17 passengers died when they were cast overboard in Tillamook, Oregon. The Taki Too was a small passenger vessel that capsized just offshore. There were plenty of life vests stored in the ships cabin. The captain offered the passengers life vests before the voyage, and instructed them in their use, but the passengers declined. When their ship capsized, the majority of passengers were unable to reach the vests in time. Please note: in this disaster, drowning didn’t cause death, it was actually hypothermia and shock of the cold Pacific Northwest ocean temperature. 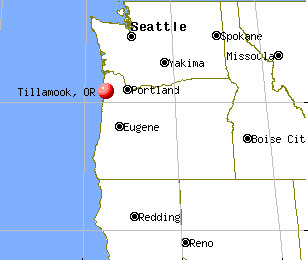 The Problem(s)
Our Solution

(Please VOTE now at Tech Briefs website)
In emergency situations, there is little time to think if any at all and therefore any delay in response time can be lethal.

This is why Village Memorial has developed The LIFE PACK, a first of its kind dual bag floatation device incorporating an inner thermal lined compartment, which holds a heat generating super-corrosion sleeve. (This slim lightweight disposable Magnesium particle impregnated sleeve is also currently used in flameless ration heaters (FRH).) This heat-generating element creates an exothermic reaction, which allows its wearer to maintain homeostasis for several minutes even in dangerously cold water. This is intended to give emergency responders additional valuable response time in a marine rescue.

In just 12 minutes the standard FRH sleeve’s temperature can reach 60 degrees Celsius (enough heat to bring a liter of water to a boil). Heat is generated because the FRH contains magnesium metal impregnated material that when mixed with salt water, forms magnesium hydroxide, and hydrogen initiating the giving off of excess energy. 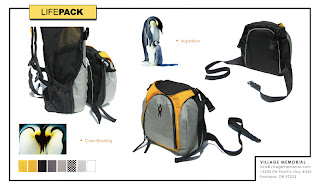 The LIFE PACK is a bag that is always with you whether or not you need a life saving device. To protect passengers from unexpected circumstances, we must design emergency gear for redundancy of purpose. It has to be fun to use and sporty in appearance, which is why we chose Emperor Penguins as our inspiration for staying warm in icy water. The most important thing we can do is develop products that people want to have with them that also function as a life saving device. Statistically, most adults put life jackets on children but not on themselves. This inspired us to design it so the wearer can hold a child hands free in water.
(Please VOTE now at Tech Briefs website)

Create the Future - Design Contest
(Sponsored by COMSOL, Nordson EFD, and Tech Briefs Media Group)
There are only two days left to vote in Tech Briefs 2012 Create the Future Design Contest. Learn more about the LIFE PACK and the contest by clicking here:
http://contest.techbriefs.com/safety-and-security-2012-by-title/2226-life-pack--hypothermia-prevention-floatation-device