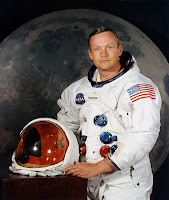 American Astronaut, Neil Armstrong, has died at age 82. He was the first person to step foot on the surface of the moon on July 20, 1969. Armstrong had a student’s pilot license before he could even drive. He served as a US Navy Officer in the Korean War. He led the Apollo 11 spaceflight as mission commander. He graduated from Purdue University with a BS in Aeronautical Engineering. He earned a Master of Science degree in engineering from USC. He also taught Aeronautical Engineering at the University of Cincinnati. He was awarded the Presidential Medal of Freedom, a Congressional Space Medal of Honor, a Congressional Gold Medal, and a Langley Gold Medal. Neil Armstrong’s first words after landing on the moon would be come part of the American lexicon: “"That's one small step for man, one giant leap for mankind."