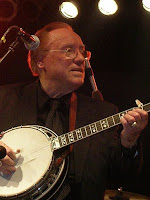 Earl Scruggs was one of the first inductees in the International Bluegrass Music Hall of Fame. He won 2 Grammy Awards, has a star on the Hollywood Walk of Fame and received a Lifetime Achievement Award at the 50th Grammy Awards.

Did you know?
Scrugg's work (with Lester Flatt and singer Jerry Scoggins) was immortalized as the theme song to the TV show "The Beverly Hillbillies".