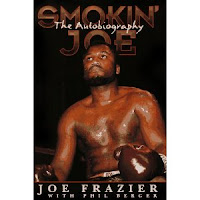 American Boxing legend Joe Frazier has died from liver cancer. "Smokin' Joe" won 32 out of 37 fights during his boxing career, 27 of which were Knock Outs. In 1996, he wrote an autobiography called "Smokin' Joe: The Autobiography of a Heavyweight Champion of the World, Smokin' Joe Frazier". In recent years until 2009, Mr. Frazier owned a boxing gym where he trained young boxers. Former rival, Muhummad Ali upon hearing of his death said - "The world has lost a great champion. I will always remember Joe with respect and admiration."