Dementia: A Focus on the Good 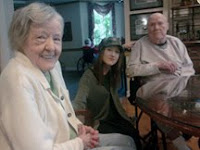 Today was a good day. I had the privilege of spending 3 hours with my grandparents at their assisted living home in Southern California, after not seeing them since September of 2010.

I was happy to find their health and cognition was better than I expected. (I always imagine the worst as I live at a distance and phone calls are difficult due to hearing.) Although my grandmother (who has dementia) could not remember some things we brought up (her former job, my husband’s grandmother), she did remember me and told me how happy she was to see me. She even told me she loved me as she patted my arm. It was about 2.5 hours into my visit at that point, and came as a complete, but wonderful surprise.

This is what fascinates me about dementia and Alzheimer’s. I recently read a book about Oscar, the cat that seems able to predict death in a dementia ward of a skilled nursing facility. The geriatrician who wrote the book interviews families, and all the families commented on the selectivity of their loved ones’ memories. For many, feelings seem to be immune to the memory barrier of dementia. One particular family spoke of how when their mother and aunt ended up with dementia and were in the nursing home at the same time, they decided to place them in the same room because they’d always been close and lived together in the past. Although the sisters could not recall their own names, or each other's, somehow the feelings they’d had toward each other remained. Their rapport and connection was apparent even during the throws of dementia.

I often waiver between regrets, wishing I done more with my grandma while she was cognizant, wishing I’d listened more closely, recorded more stories, never been a rude and rotten teenager. I must live with all these regrets, but somehow today it felt that her dementia has bought me the forgiveness I was never able to allow myself. She can’t remember the bad; she just remembers the good. It’s a lesson to me. There are so many things I would be wiser to let go of.

I am grateful for what I have learned in how to deal with dementia. During my visit today, I didn’t correct my grandmother. When she said, “I don’t know”, I said, “That’s okay” or “It’s not important.” When she clapped her hands or drummed her open palm on the table, I made eye contact and smiled. I believe what I have learned of dealing with dementia allowed this visit to be one of the best visits I’ve had with my grandmother since dementia took hold.