Alzheimer's: The Art of Losing 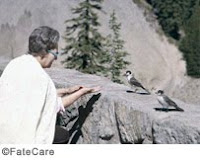 I found Ruth L. Ozeki’s piece, "The Art of Losing: On Writing, Dying, & Mom," of special interest because my grandmother suffers from Alzheimer’s. I wanted to learn how others deal with such a long-term loss of one who slips away slowly over several years. Though my grandmother’s health in other aspects is not bad, the fact that she cannot recall names, faces, places or family history is a death of sorts. It is a death of memory. Somehow families must push through with the awareness that their loved one is no longer who they once were in healthier times. We must learn to love a new person who looks a great deal like the old person, but may or may not remember us from day to day. We must learn to not hold anger or resent their loss of memories we revere, but learn to appreciate new memories we can create while they are still with us. I felt Ozeki really proved how important this step is. Ozeki’s adaptability enabled her to build new memories with her mother and prepared her for her mother’s passing. Ozeki’s piece was an inspiration to any person dealing with a loved one suffering from Alzheimer’s.

Ruth Ozeki discusses writing the article “The Art of Losing: On Writing, Dying, & Mom” which she was asked to consider renaming to “The Art of Letting Go”. Ozeki thoughtfully considers the alteration in meaning via a poem by Elizabeth Bishop titled “One Art.” Ozeki describes the poem as “clearly…a case where ‘losing’ and ‘letting go’ are not interchangeable.” Ozeki highlights some differences between letting go and losing: “When I let go, I’m in control; when I lose, I’m not. Letting go is a willful act; losing, a violation of my will.”

Ozeki then discusses the traditions her family’s Japanese culture and the custom of sitting zazen during spiritual meditation. Her mother as a 2nd generation Japanese American had so much distance from her Japanese roots that she did not meditate in the zazen position and this prevented her from attending her grandmother’s funeral. Her inability to sit in the position would be “an embarrassment to the family,” Ozeki explains. At the funeral in Japan Ozeki explains another Japanese custom called “honewake” or “dividing the bones, which is often practiced when a person’s family lives in different places.” She returned from Japan with some bones of her grandmother, which she was to deliver to her mother. The experience inspired her to film a documentary called “Halving the Bones.”

Once Ozeki’s father died, she asked her mother with Alzheimer’s to come live with her in 1999. She cared for her mother until her death in late 2004, but reflects on some of the exchanges that took place between she and her mother during those five years. Once mother expressed concern that the washer and dryer in the guesthouse she lived in would prevent Ozeki from washing laundry once she died and Ozeki rented the guesthouse to another person. Ozeki settled the concern by jokingly confirming she would bury her mom with the washer and dryer so she could keep her clothes clean in heaven. When her mother turned 90 in May of 2004, her mom was in disbelief that she was 90. She said she felt forty and when Ozeki confirmed that even she was “older than forty,” her mother replied, “You are? That’s terrible!”

Ozeki then reflected on the differences in how she handled the deaths of her father and her mother. When her father died, she wasn’t ready for it. She held much anger at him for not preparing for it. She drank too much during the grieving process. However, the time she spent with her mom prepared them both for her mother’s death. “I wanted to keep my wits about me. I didn’t want to run away." She also encourages that people “write your loss” – “I spent ten years losing my mom, little by little, day by day, but during that time, I wrote books, letters, e-mails, blog postings, stories, journal entries, and poems…I’ve been turning loss into letting go.”