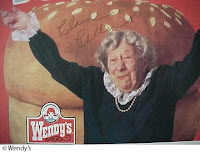 Walker discusses advertising campaigns that include what he describes as “Hilarious Old People.” He recalls the lovable Clara from the “Where’s the Beef?” commercials, and notes that the amusing elder archetype has been in low demand in recent years. He believes this might be related to the growing number of “mature consumers who happen to have money to spend and don’t think of themselves as (barely) living punch lines” (Walker, 2003).

I was interested in Walker’s piece because as an infrequent watcher of television, I recently witnessed some stereotypical jokes and comments on seniors that took place on an episode of the 1974 series “Rhoda”. On episode 10 of season 1, title character “Rhoda” and her new husband “Joe” are given the gift of a honeymoon cruise. The comedic part is that the cruise also happens to be hosting a senior citizens convention.

Some of the ageist jokes at the expense of seniors included:
• An emcee addressing the cruise crowd as: “Ladies and Geritol – and there’s plenty of it in this room.”
• An onboard doctor who quips that the boat should have a red cross painted on the side of it. (He even takes anyone’s pulse that he finds sleeping, because he never knows.)
• A convention workshop on Polydent.
• A senior lady whose line gets loud audience laughs when she tells 30-something aged “Joe” during a dance: “Let me know if you get tired.”

Sadly, as Walker’s article on seniors in advertising highlights, seniors have not come very far in their depictions on screen. However, Walker is inaccurate in his claim that this is a returning phenomena, which implies that it stopped or slowed. Seniors have continued (if we begin counting forward from this 1974 episode) for over 3 decades to be portrayed as comedic archetypes. Though, I would like to make note of the fact that I clearly recall senior comedic archetypes appearing as far back as in 1950's episodes of "I Love Lucy."

It is difficult to believe this trend of “hilarious old people” continues when one considers how many boomers are set to become seniors over the next couple of decades. Only the companies with the highest integrity, offering consumers the best value for their money, delivering fantastic and engaging storytelling will successfully grab the senior market.