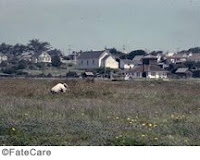 A relative, Mr. P., refuses to buy his wife a hearing aid. He and Mrs. P., never really had what one would describe as a good relationship, and now that Mrs. P., cannot hear much of what he says or what others say when they visit, it appears to suit Mr. P. just fine. Mrs. P., with her hearing loss cannot keep up with the conversation, and frequently falls asleep when at the table where conversation is occurring. Mrs. P. therefore suffers from social isolation due to her hearing loss.

With an elderly property manager, Dale, who suffered hearing loss, I had to adopt a “louder and slower conversational style” (p. 236) to ensure he heard and understood me. If I did not use this style of speaking, he would inevitably ask me what I had said. His hearing loss led to “increased requests for information to be repeated in conversation” (p. 236). Dale’s hearing loss led me to keep in person conversations brief and send him emails if I had a lot to explain or more complicated information. Fortunately, Dale used email.

Some facts about hearing loss associated with aging (Presbycusis):
* Increases after age 45
* Causes difficulty in the ability to discriminate between higher frequency consonants like F, G, S, T and Z (p. 236).
* Elderly may tend to “fill in the gaps” and guess what they have missed in the conversation or resort to “lip reading”
* Can affect one’s speech “as people rely on their ability to hear as feedback for monitoring speech” (p. 238).

Conversational Issue with combined Hearing/Sight loss:
* To “compensate for reduced ability to see or hear” people often end up “standing closer to the information source” (p. 237) thereby infringing on the others personal space. This “can be considered inappropriate, making conversation unpleasant” (p. 238).

A favorite elderly neighbor of mine, Alice, who was in her 80’s when I knew her, experienced both sight and hearing loss. On the back of her front door she had taped a sheet of paper that read: “Don’t Forget - Glasses, Hearing Aid, Dentures, Keys, Purse.” Perhaps this was the key to her success. She never left home without her "essentials" and she was able to live a very active life.