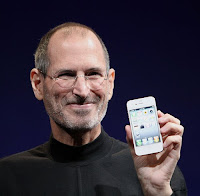 Steve Jobs, former CEO, chairman, and co-founder of Apple Inc. has died. He fought pancreatic cancer in the mid 2000's and received a liver transplant in 2009. Steve Jobs helped found Apple computers in the late 1970s and served on the board of the Walt Disney Company. Before Disney acquired Pixar, he owned 50.1% of the animation studio. He resigned from Apple on August 24, 2011.

Apple's statement upon his death was: "We are deeply saddened to announce that Steve Jobs passed away today. Steve's brilliance, passion and energy were the source of countless innovations that enrich and improve all of our lives. The world is immeasurably better because of Steve. His greatest love was for his wife, Laurene, and his family. Our hearts go out to them and to all who were touched by his extraordinary gifts."