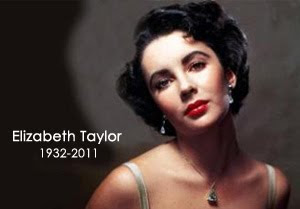 Legendary British-American actress, Elizabeth Taylor, has died from congestive heart failure. In a successful career spanning 7 decades, she received 3 Oscars, performing in such notable films as "Cleopatra", "Who's Afraid of Virgina Woolf", "Cat on a Hot Tin Roof", "Giant", and "The Taming of the Shrew." She was also founding national chairman for American Foundation for AIDS Research (amFAR). On March 24, she was buried at Forest Lawn in Glendale CA, in the same cemetery where friend Michael Jackson is interred.